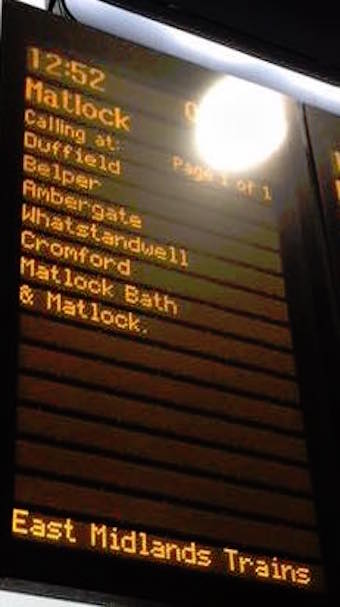 Well this trip was a few months ago and so much has been going on that we never got around to writing up our visit. We have a few today so they will be shorter than usual but with all of the info you would expect!

After a successful Rail Ale Trail in Exeter a few years ago, Jodi decided it would be fun to do one again. There were a few we could do from Derby and as it is not that far on the train, we decided on there.

We were all due to meet at St. Pancras before the trains departed, but due to circumstances it did not quite work that way, Bruce, Ashley and myself met up and made it on the train.

However, East Midland Trains, in their infinite wisdom had two trains departing at roughly the same time on the same platform (2A and 2B). The signage was not really helpful and whilst our train was pulling out of the station, Bruce was on the phone with Alyssa who said don’t worry we are on the train see you in a second.

They were on “a” train just not the train they needed to be. After some “discussions” with platform staff and hearing this happens all of the time…. They were able to board a different train and in the end were only about 20 min behind us.

Once we all made it to Derby we met up and headed off for the trail.

We visited 5 pubs and due to weather and energy we called it a day after the 4th stop.

The trail run from Derby to Matlock and the pub we made it to were:

The White Hart – Duffield – Don’t try to order food. Gave up on the chips I ordered after 45 min

Cromford train station is located about a mile from the pubs and if the weather held out it would have been a nice walk. However, about 750 feet from the station it started raining and as we got to town it started pouring like in Forest Gump and we just broke into a sprint to get to The Boat Inn.

We decided to call it a day after this pub but due to the train timings had an hour to kill so we visited the other pub in town.

We headed back to Derby for dinner. Jodi decided on a place called Moonsha, which is a Teppanyaki place. Whilst slightly overpriced and a non standard setup we enjoyed ourselves and enjoyed dinner.

We called it a night after this and headed back to the hotel.

The next day, I met an old friend for coffee. Kirstie and I had not seen each other for years, but it was like we had just seen each other a few days before. We had a nice catch up that sadly was too short, but I needed to get back as I had a train to catch.

The train journey home was uneventful.

Once home we packed up the car as the next day we were off to Scotland for our big move.

For those of you that did not know, Bruce got a promotion a work, which meant a big move to Scotland for us. I am sure we will do a blog post or two about our experiences in Scotland.