We have been to Munich in the past, but we were not able to see it fully as we had been in Bratislava just before on that trip and Bruce had hurt his ankle, so we decided to go back and give it another shot.

We enjoy a BA holiday as you guys know and this was not different. Got a great deal and a really nice hotel to boot.

We started off in the lounge and whilst it was crowded and the food had run out, there was plenty of booze at 7 to kick the trip off!

It was a quick uneventful flight and we were in Munich.

After arrival we made our way to the S-Bahn station and once I figured out how to use the ticket machine (If you are travelling with others, the group day ticket is an awesome value), we were off to the city and 45 minutes and one change later we arrived at the NordFriedHof station where our hotel was located. Turns out it was right above the station which was good as it started raining.

We checked in and headed up to our room. It was a really nice room with everything you need including a private bathroom (see our Bratislava blog to know what I mean) an a big bed.

We decided to go to the hotel bar as due to my Accor status, they gave each of us a free drink.

So we headed in to the city and stopped off at Marienplatz where we needed some food and ended up at a place called Ruff Burger. They had great burgers and awesome chilli cheese fries! I should point out it was one of the few places open. It was a bank Holiday and everything but food places were shut!

After our awesome burgers, we decided to find HofBrauHaus and as it was raining we put the ol’ Apple watch to the test. Overall it worked pretty well and a few minutes later we arrived.

It was packed and there was not seat to be had and we couldn’t sit outside due to the rain so we did one more walk through and popped into the Dubliner Irish Pub. We had a beer and chilled whilst the place was over run by a stag do of Irishmen, we had a quick drink and left as they were a bit OTT for us. We then decided to pop over to the Sendlinger Tor area, just to see what was on the way. We walked through the completely shut Viktualienmarkt and found a beer hall called Der Pschorr, they were packed, but able to squeeze us in and we enjoyed a few beers and then continued moving on to Sendlinger Tor where we found  M.C. Mueller. We had a beer and then I needed to pop out to take a work call and Bruce had another beer whilst he waited for me. After I came back I tried to pay for his beer and they served me another beer. (it had a €30 min for card and we were out of cash at this point) so I popped to the bank and tried to pay for our beers again and we got two more. After this I was very clear in what I was trying to do and in the end we paid for 4 extra beers and had a great time. They looked to have some really good burgers so may have to try it next time I am in Munich. 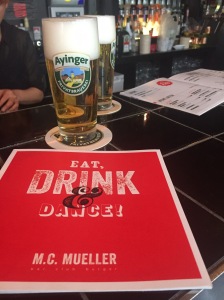 We decided to walk around a bit more but as it started to get dark we decided to head back to the hotel so starting at Sendlinger Tor we headed back. It started to rain again, so again the Apple Watch helped direct us. We made it to Giselastraße before giving up. We had been to this area before and it was a nice area. We tried to get into a few of the restaurants, but they were full so we ended up at the new McDonalds (not by choice this time) across the road and after dinner and due to being soaked we took the U-Bahn back to the hotel and called it a night.

Hannah and Brett were joining us on this trip, but had no more days to take off work so they flew over on the Saturday to join us. Their room wasn’t ready yet, so we chilled in the bar to come up with our plan for the day and have a few beers and by the time we were done the room was ready and we were off to experience the city together.

We went back to Der Pschorr as the food looked good and we enjoyed some lunch and beers. As part of lunch we tried Obatzda which was pretty good and possibly the best Spatzle I have ever had.

After lunch we walked around the city for a while and then made our way to the HauptbahnHof where were meeting for a Munich Beer and Food Tour. The tour took us for a walk around the city and then a trip on the S-Bahn to the Bier- und Oktoberfestmuseum where we learned more about beer, sampled some beer and had a pretzel before taking a tour of the Museum.

After the Museum we hopped the tram to the HofBrauKeller for some traditional Bavarian Cuisine and of course more beer. It is a nice beer hall and once we had all had our fill of beer and food, we made the trip back to HofBrauHaus for the final part of the tour.

Once again it was packed and we couldn’t get in, so we decided to try to walk back to the hotel, but due to the beer consumed, we only made it to Universitat, before taking the U-Bahn back to the hotel and calling it a night.

We decided to put our all network group ticket to work and headed out to Starnberger See. It is a small town on a lake and it looked like it could be interesting. Its about 45 min journey and the S-Bahn is comfortable. We had a nice journey out, but the weather took a bit of a turn on the way and it was misty once we arrived. The S-Bahn runs every 20 minutes. We made it exactly 20 minutes and sat in the same seats on the same train on the way back.

The area was nice, but due to the weather we couldn’t hang for long and headed back on the next train.

On the tour last night the guide told us that a mini Oktoberfest was on at the grounds so we headed there. It is called the Munich Spring Festival. There were two beer hall tents and a fun fair. We went into one, ordered litres of beers and a massive pretzel.

It was pretty cool and not too crowded, so in my mind we got a mini Oktoberfest experience without the crowds or cost 🙂

We headed to the Deutsches Museum, and whilst it was cool, would have been better if it was more hands on, but I think we all enjoyed (especially Brett and I with all of the travel exhibits) ourselves.

For Dinner we went to Block House at Giselastraße. It could have been any of the restaurants in the area, but it was the first one we saw.

After dinner we thought the Olympiapark would be nice to visit and headed over. It was built for the 1972 Olympic Games and it is still in great shape. As expected not too much was going on, but the Wings for Life World Run, so we watched the final bits on the big screen. We popped into the BMW Welt for a quick look and then we called it a night and headed back to the hotel.

Sadly this was our final day and it was time for the Glockenspiel. So we checked out of the hotel and headed over to watch the famous clock. 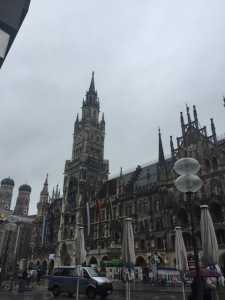 We introduced Hannah and Brett to Ruff Burger and once we were all done went for a walk towards the HBF stopping at every shoe store I saw as I wanted a new pair of Converse. In the end we stopped at a store we were all at the day before and I found a pair that fit and that I liked. We parted ways with Hannah and Brett as they were on a later flight and went back to the hotel the long way to get out bag and then headed to the Flughafen for our flight home.

We spent a little bit of time in the Lounge (Berlin’s is better) and then board the plane for the flight home.