This trip was originally supposed to be to Ljubljana, however we had some issues with flights (there were none) so instead we talked Shannon in to Bratislava, as we were there a few years a go and wanted to give it another go.

BA had a great holiday deal (via Vienna, they seemed to have learned a few things from Ryanair), even over Easter, so we booked it!

We ended up meeting Shannon in security as Bruce was waiting for his shoes as he beeped going through Security. Thanks to his shoes getting scanned we got to meet possibly one of the rudest most unprofessional woman we have ever run across. The quick story is there were several (5) people waiting to get their items that had been pulled for secondary screening. There were two people being searched I mean there bags being dumped upside down and searched. Whilst everyone else was waiting for small items. I asked the Security Team Leader if she could possibly grab the small items so people could get on their way. She said that was not possible and we would have to wait. The guy behind us asked the same thing and said the wait was a joke.

This set her off and she went into a tirade that Airport Security is not a joke and is very serious. How we are lucky to be waiting and going through Heathrow, as it is the safest airport in the world. She continued on about how Airport Security was not a joke as she walked away. After that one of the security guys took pity on all of those who were waiting for small items and after a quick passport swab handed back the items and sent them on their way.

We then popped into Oriel for a quick breakfast and made our way to the plane. Overall the flight was uneventful and we arrived on time. Immigration was ok, but the bags took forever. Once out of baggage claim our transfer was waiting with a sign and off we went on the scenic route to Bratislava

We made it to the hotel a little early and the rooms we had booked were not ready, however they were able to find us both rooms. Bruce and I were upgraded to a Privilege Room, which also included access to the Privilege Lounge (Shannon got it too so it became our meeting place). The room was great and a bit bigger than Shannon’s, but had one massive issue.

Yep that’s right no curtain or anything to give you a little privacy in the bathroom. Apparently it was part of the design and even the staff did not understand it.

So we wondered into town to see what we can see, as it was Good Friday, almost none of the shops were open, but the bars were so it was ok.

Our first stop was a little Mexican fusion place called El Diablo for some food. It was as expected… not too good, but the guacamole was decent.

Next door was a Scottish Pub called the “Lochness Scottish Pub” they had a few Brew Dog’s on tap and several different ones in bottles plus some cider for Shannon. They were a bit overpriced and no real atmosphere or Wi-Fi, but we could get the Wi-Fi from El Diablo so it was ok.

As we were walking around we saw the Beer Pub Kristián, It’s a bit of a scary place with not much choice so we didn’t hang out for too long. They didn’t have ay Wi-Fi either.

Next up we decided to go Cuban… There used to be a La Bodeguita del Medio just across the street from El Diablo, I was hoping to visit, but it has closed. In its place, apparently for a very long time, and just up the road is Casa del Havana, it is definitely worth a visit. They had great mojitos and daiquiris and we visited a few times! 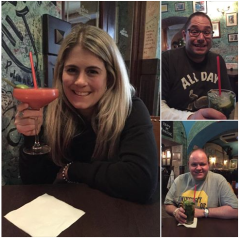 After an afternoon of drinking we needed some food, so we walked around and nothing really called to us esp. as Bruce did not feel we were dressed appropriately (jeans and a t-shirt) for any of the places so we ended up at a place called Primi just across from Casa del Havana.

The food was pretty good and the prices were reasonable, but a word of warning the local Slovakian wine is not all that good.

After this it was getting late and we headed back to the hotel for a nightcap and some sleep.

As we were near the station and Bruce and I have fond memories. So before hitting the town for the day we popped over to see what we could see. It appears to be a bit nicer than it was during our last visit and the shops were open so we could get some provisions for the room.

We settled on All Stars Café for lunch. The wings were great and the burgers were ok (liked mine, Bruce and Shannon were not as happy with theirs.) The service on the other hand, if you take out the language difficulties was great and they could not do enough for us.

We decided to take the road train city tour; they offered two routes Old Town and Castle so we took both. It was a good way to kill a few hours (and take a nap if your name is Dan or Shannon) even though the music was not as good as Riga.

After the tour we visited Slodvna for a beer as we read they had fruit beer, they didn’t but they did have some Belgian beers so we had a quick one and moved on. The next on the list was a place called 17’s who once again according to review had fruit beer.

On the way we found the ice cream mouse where Bruce took this fine photo on our first trip: 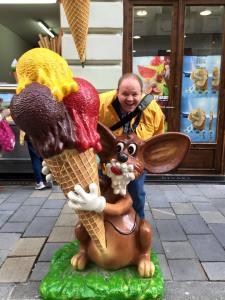 17’s was a winner and it made Shannon very happy. We also realised we were across from the monstrosity that is the US embassy. It is sad does not matter what country we have visited the US Consulate or Embassy is always heavily fortified and does not fit in with any of their surroundings.

After a few drinks we headed over to the Green Buddha for dinner. Whilst Thai sounded good, their interpretation of it left a bit to be desired but we enjoyed ourselves none the less and the service was great!

After dinner we called it a night.

We started the day a bit later and decided to start the day at the KGB pub, which sadly was closed. We needed to eat so we went to Mc Donald’s needless to say it was the same as it always is.

After the disappointing experience, we needed some cheering up so off to Casa del Havana for a few Mojitos.

After this we walked to one of the biggest tour traps in the city also known as the UFO.

The one thing it does offer is great views of the city.

After this we popped back into 17’s and enjoyed a few beers before seeking some place new. What place better than the Camel Pub. We enjoyed a drink whilst planning our next trip (still planning so who knows) where we ran in to a Danish guy travelling with his young boys. The conversation was just weird as we talked about US taxation, his ex wife’s new boyfriend and the Danish “NSA”.

We still had some time before our dinner reservations, so we headed over to the Irish pub I have been trying to go to since we arrived and not only did the Dubliner have cider it was a just a good atmosphere and music.

It was finally time for dinner, which we booked to be sure we had some place to eat instead of the hotel.

For dinner we chose possibly the most expensive restaurant in the city called El Gaucho. We were not disappointed, but possibly we did not need to book. Our server who we have nicknamed “Shammy” due to Shamrock being tattooed on his knuckles. We also learned he loves his Mom and Dad due to the tattoo on his forearm. Shammy provided us with awesome service and made sure we were happy the entire time we were there. The food and wine was amazing and we really enjoyed our Easter meal.

Once dinner was over it was time for bed, yes we are getting old, and we decided instead of walking back we should take the scary tram. We went to the tram stop and saw it was a 5 min until the next one. We waited 30 minutes and none came, we saw them going the other way, but they never came back so in the end we took the bus. We only wanted to take the tram to say we took the tram but sadly it was not meant to be.

It’s a sad day our trip is over. We had breakfast at the hotel (it was ok but over priced) and then packed and waited for our transfer back to the airport. We were picked up right on time and made it to the airport in no time.

We were able to check in quickly and made our way through the initial boarding pass check and walked around the shops. After passport control, we left Shannon for a little bit and headed to the smallest most over crowded lounge we have been to, but it had a nice tarmac view so I made Bruce a Bloody Mary and we relaxed for a bit before joining Shannon for security and boarding the plane home.

The e-passport gates were operational and Shannon got to break in her the “e” in  her UK passport on them.

Sadly the trip was over and we parted ways, but we will get to see Shannon again in Manchester when we visit her later this year.

Our next trip will be to Munich and we will tell you all about it. But in the mean time we need some feedback from you. Does this format work for you, what would you like to see more / less of?

Thanks for reading and I leave you with a clip from Eurotrip about Bratislava: