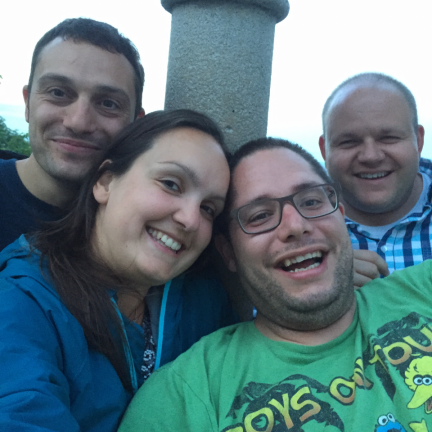 So Dan is insistent that I write one of these blog posts myself since apparently this entire thing was my idea.

Budapest is an amazing city. Before this trip I had been twice before (2007 & 2013) and Dan had been once before in 2013. Despite having been before when our friend Hannah pointed out that British Airways was doing a cheap package holiday for the bank holiday weekend we jumped at the chance. Due to our many holidays we decided to forgo taking the Friday off and take the 20:45 flight from Heathrow on the Friday night so that we would have the entire Saturday.  On this particular occasion we chose to stay in the Mercure Korona on the Pest side near the city market.

We booked this trip in Nov 2014 so we had months of anticipation. Finally Friday the 22nd of May arrived.  Dan was going to go straight to the airport from work and I was going to meet him, Hannah and Brett at the airport.  I had plans of trying to wrap up work a bit early that day but as usual that didn’t quite happen.  I managed to meet Dan in front of terminal 3 at about 18:30, Hannah and Brett were already through security and at the pub. We quickly checked in and headed to fast track security but as luck would have it they re-routed us into the normal security line due to a queue of 3 people in fast track. Despite this change we made it through security quick and met Hannah and Brett at the Bridge pub for a few drinks and some food before boarding the flight.  The food was decent but the service had much to be desired since they forgot one of the meals and had to be chased down to get it corrected. After eating Hannah and Brett went off to do some shopping and Dan and I headed off to the lounge to have a quick drink.

We boarded the flight and overall the flight was uneventful. There was a group of 20 something’s on the plane headed celebrate someone’s birthday in Budapest and they were doing their best to drink the plane dry but they were more or less harmless. We arrived just after midnight in Budapest.  We quickly headed to the baggage claim and the ATM where we took out 80,000 Fortnys or as we like to call it the”hufflepuff” a phrase that was coined on the prior trip since the common abbreviation is HUF.

We met our driver and did the quick transfer to the hotel. Once we checked in we tried to go to the pub across the road, but it shut as we were checking in so instead we headed to the Kebab shop around the corner and had a quick bite. The cost of a 2 kebab’s and 4 sodas was 3200 hufflepuffs (7quid). I only point this out not only to show how cheap it is but also because when we got back to the room, I had 80,500 so we made money!

We started out the day at the local market called Central Market Hall (Nagy Vasarcsarnok). We enjoyed a few pastries for Breakfast then it was time for some beer. We headed up to the main shopping street and it started pissing it down and I mean we should have been looking for an ark it was so bad, so we decided to get that beer so we found a nice little outdoor cafe. Whilst waiting out the rain, Hannah’s brother Jon arrived at the airport. He was coming for a stag but everyone else was arriving later. We had decided on Hooters for lunch so we told him to meet us there and as the rain let up we made our way there quickly.

I would like to say Hooters was better than last time, whilst the food was ok and as expected (boneless wings were a great value) the service was absolutely the worst. I won’t dwell on the negative aspects of the meal. We enjoyed our time together, but then it was time to part ways as we had a wine tasting and he had a stag.

We walked around the city a bit more then headed across the Chain Bridge and to the funicular for our journey up the hill to Faust Wine Cellar in the Hilton hotel on the Buda side. We had been here on our last trip and had an awesome tasting and wanted to give it a try again.

We arrived and were greeted as old friends. Gabor and Barbara remembered us from our previous visit (I looked I never mentioned in my booking emails) They took us through the entire tutored tasting and for Bruce and I compared the current vintage to what we would have tasted during our last tasting. They work with a number of small wineries in Hungary and buy, in some cases, the full production or close to it, which means most of what you are tasting is only available there or the winery.

Once again we walked the streets of the city. We were headed to a place that Hannah’s friend suggested that was near where Hooters was, but sadly it was closed so we ended up on the same street as Hooters at a place across the way called Café Vian. It has some good local food and was a good price even with our tower of beer.

After lunch we walked to the river and took a river sightseeing cruise. It was much better than the one we took previously and it included two drinks which was a nice touch. It was a nice day albeit a little windy, so we enjoyed sitting outside. The temp the whole trip was warm which was nice.

We walked around the city a bit more and the headed to Divino for some wine. We decided on a local sparkling that was pretty nice and just sat out side and enjoyed the wine and the weather.

It was time for dinner. I booked us into Trófea Grill Étterem Király. This is a buffet restaurant we went to on the last visit. Basically one price about £14 a person includes everything in the place. Decent selection of food including a grill area, pizza, desserts and the best part it also includes all you can drink wine, sparkling wine, beer and soft drinks. They allow you to have 3 hours for dinner we took 2 ½ 🙂

It was getting late so we took a long walk back to hotel stopped off at a few gift shops and I didn’t need it but I got some Facebook ice cream that tasted remarkably like bubble gum ice cream.

It was our final day so pretty boring, just a trip to the airport and an easy flight home.

Overall a good trip and we wanna go back!

Next up is 27 hours in Copenhagen.